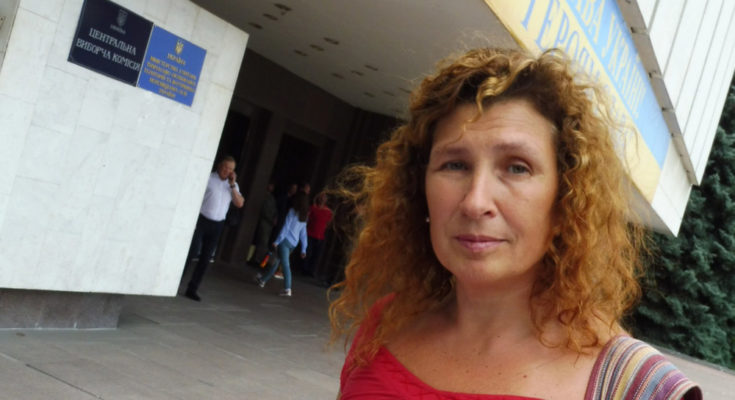 We know many young people 18, 19, 20, 21 years old wanted to vote for the first time at the elections of the President of Ukraine but faced denial because of the absence of a registered voting address.

Internally displaced persons (IDPs) and human rights organizations appealed to the Central Election Commission of Ukraine with a request to allow IDPs to vote in single-member districts at the parliamentary elections on 21 July 2019.

There are 1,4 million IDP citizens of Ukraine, only near 47 thousand of them or 3% are partly allowed to participate in current elections because of bureaucratic complications.

Ukraine have a mixed election system: half of the seats in the parliament (Verkhovna Rada) are allocated through party lists and another half through single-mandate districts. Almost all Ukrainian voters on the voting day receive two ballot papers: first to vote for party list (unified ballot paper for all districts) and second to vote for a single candidate (unique ballot paper for each district). IDPs can receive only one ballot paper to vote for a political party. Furthermore, IDPs, unlike other citizens, are unable to vote at all without additional efforts.

The problem is that the place of residence of the IDPs is registered in the Russian-occupied territory. Therefore, they can’t be included automatically in the voter list in any electoral district. To be included in the voter list to vote for political parties, IDPs can go through a formal procedure of temporary changing the place of voting without changing the voting address. However, such voters are deprived of the opportunity to vote for the MP in single-member districts.

Natalia Antropova, an internally displaced person from the Luhansk region and a member of the Luhansk Human Rights Protection Group, lives in a hostel in Kyiv for 5 years. “For five years we have been fighting for our rights as internally displaced persons, for the realization of our rights,” – she says. – “At the moment, we have brought applications to the Central Election Commission to fully exercise our right to vote in elections to the Verkhovna Rada of Ukraine.”

“Our large family arrived from Donetsk to Kyiv in 2014 to stay in our motherland,” – says Ms. Omelchenko. – “Since then, we have not been able to realize our rights, neither social, nor economic, nor even political. We did not have the right to vote at the local elections in 2015; we took legal action in domestic courts without success, and now our application is pending at the European Court of Human Rights. And now, at the elections to the Verkhovna Rada, we deprived again the right to elect our representatives in the parliament. Some citizens aren’t allowed to vote during all elections, presidential and parliamentary; they can’t change the place of voting to get the ballot paper an vote for a party list. These are the people who turned 18 after they became IDPs. They were not listed in the State Register of Voters before the war, and now they have no voting address nor the registered place of residence – neither in Donetsk, nor Luhansk nor, obviously, in another region of Ukraine. We know many young people 18, 19, 20, 21 years old wanted to vote for the first time at the elections of the President of Ukraine but faced denial because of the absence of a registered voting address. What can I say? The victims of the war in Ukraine are, perhaps, citizens of the third grade, not even the second. We are treated not as citizens of our own country since we cannot participate in the democratic process. We cannot elect almost half of the Verkhovna Rada of Ukraine. We demand the protection of our voting rights!”

Lawyer Nataliya Tselovalnichenko, leader of the Luhansk Human Rights Protection Group, in the opinion published in Pravdoshukach Newspaper argues that the officially verified place of residence of IDPs should be automatically included in the State Register of Voters of Ukraine as their voting address. Since the newly adopted Electoral Code isn’t applicable yet, the Central Election Commission should terminate the policy of inaction and take the necessary decision to guarantee the voting rights of IDPs at current elections. In her view, exclusion of almost 1.4 million of internally displaced voters calls into question the legitimacy of whole elections.

Oleksandr Stelmakh, head of the Service Manager of the State Register of Voters of Ukraine, holds another opinion. He believes that the state is trying to provide IDPs opportunity to enjoy their voting rights. At least, the mechanism of temporary change of place of voting allows almost 47 thousand IDPs to vote for political parties. They voted in the presidential elections and will vote in parliamentary elections. He acknowledges their difficulties but takes it as inevitable for a special status of IDPs, emphasizing that there is question unresolved by legislature whether IDPs can be considered members of territorial communities on their new place of residence, where they are registered and received a certificate of IDPs.

Mr. Stelmakh said in an interview to the Pravdoshukach Newspaper that voting rights of IDPs can be fully guaranteed in case if the law on the registration of residence will be liberalized. “The Central Election Commission acts within limits and in the order, prescribed by the law. If Verkhovna Rada to amend the law, we will certainly implement it,” claims Mr. Stelmakh.