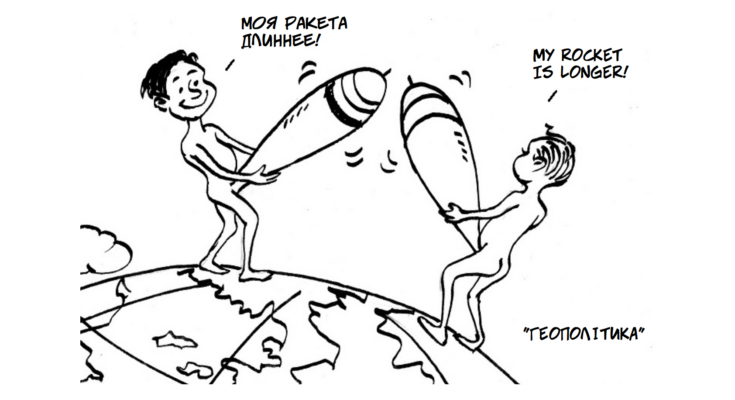 The escalation toward major war in Ukraine is unnecessary, and both West and East share equal responsibility to avoid it. If global leaders fail to negotiate sustainable peace in good faith instead of blame game and violent settlement of their power dispute on the local battlefield in Ukraine, they will be held accountable via nonviolent means by the people of Earth.

Dubious claims of legitimacy of the 2014 violent power grabs in Kyiv, Crimea and Donbass are not acceptable. In all these situations both U.S./NATO and Russia aggressively intervened, pursuing dangerous and delusional great power policies.

Global leaders recklessly exchange threats to use military force and to wage economic war against each other if their claims, or so-called red lines, will not be respected. Both “great powers” wish to own Ukraine and claim their “right” to concentrate their deadly weapons, troops and bases wherever they wish, as near to each other as they wish. Such claims not only contradict each other but blatantly cross red lines of common sense: nobody has a right to hold a gun or nuke to another’s head.

Global civil society condemns escalatory behavior of all sides of the new cold war before and during their current peace and security talks.

Saber-rattling in and over Ukraine should be stopped, Russian and U.S./NATO military forces should be withdrawn. International moratorium should be introduced on arms supply to Ukraine and Russian-controlled Donbass and Crimea. Ukrainian government should stop total mobilization of population to war and abolish conscription or, at least, guarantee the right to conscientious objection to military service in full compliance with current international human rights standards (in future, conscription should be prohibited by the international law). Peaceful settlement of current conflict should be achieved on the basis of strict compliance with ceasefire previously agreed in Normandy and Minsk formats, in further inclusive and comprehensive peace talks between all state and non-state actors.

Europe should reject NATO’s demand for greater military spending, demand that the U.S. get its nuclear weapons out of Germany, Netherlands, Italy, Belgium, and Turkey, insist on restoration of the Anti-Ballistic Missile Treaty to take U.S. missiles out of Romania and Poland, refuse the U.S.-led push for antagonism toward Russia and China, recognize the desire for peace on the part of the people of the region, and demand that the United States take the first major steps to deescalate the crisis. This will require recognizing international violence, not diplomacy, as a threat to credibility. Ideally, all nuclear powers should condemn the doctrine of mutually assured destruction and support the Treaty on the Prohibition of Nuclear Weapons.

All stakeholders should bear in mind red lines of people of the world: (1) no militarization and arms race by the cost of welfare, human rights, and environmental harmony; (2) nationalism and imperialism should step aside for development of inclusive, diverse, and fair democracy; (3) all conflicts should be settled peacefully, any buildup of structural violence is intolerable, especially talking about war, preparation to war, or threats of war.

There is no “just war” or “right side”; militarists and right-wingers on all sides provoke escalation of violence in desperate attempt to “divide and rule” and preserve their outdated war machine when it becomes more and more obsolete after universal commitment to sustainable development, peace culture, nonviolent global governance, economic and social cohesion of all people at the planet.

We need to spend on social and environmental justice, on diplomacy more than we spend on war machine. Our strategic goal should be to trash all weapons, turn all soldiers into happy civilians and reduce to zero military spending. To build the nonviolent global security system, we should demilitarize security, manage conflicts without violence, and continue to build all-encompassing peace culture.

Peace on Earth should come first before political ambitions.

This article is published at the website World BEYOND War in English, at the “Echo of Moscow” (“Эхо Москвы”) website in Russian, and at the Pravdoshukach website in Ukrainian.