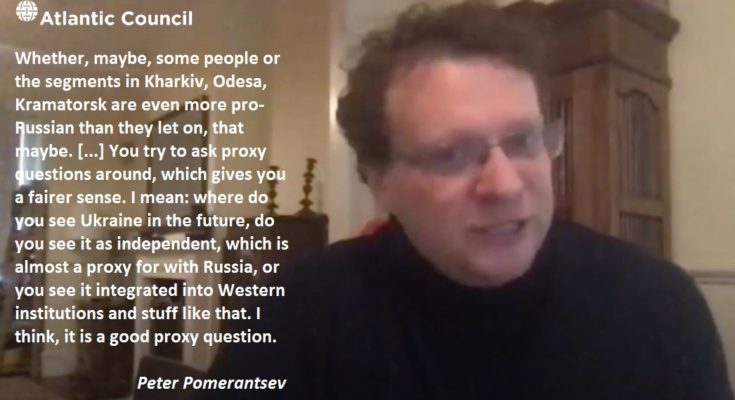 President Putin lied in 2014 that the Russian military is not involved in internal political conflict in Ukraine. Later he publicly admitted military operation led to the annexation of Crimea.

Today, President Zelensky and other Ukrainian officials claim they strive for peace in Donbas but refuse to negotiate peace with Russia-backed separatists, promoting war effort against them. A military budget last several years increased from 2% to 6% of GDP.

Eventually, the whole world was engaged in a messy battle of misinformation between Moscow and Kyiv. One of the most notorious topics of the battle is whether Ukraine is a truly independent nation.

And here Putin again proved his reputation of a hypocrite, saying that he respects Ukrainian sovereignty, but also insisting that Ukrainians and Russians are one Slavic people.

Then two narratives were emerged in Ukraine, namely the pro-Western narrative of Euro-Atlantic integration of Ukraine as an independent choice of our nation and the pro-Russian narrative of so-called external rule over Ukraine supposedly imposed by Western financial, military, and diplomatic institutions.

Both anti-colonial narratives are vague. They didn’t explain rationally, is Ukraine overcame Russian colonialism, and whether we were trapped in new dependence from the United States, European Union, and international bankers.

However, it is clear that skeptical attitude towards Ukrainian independence can be found not only in Russia but in the West too.

British scholar Peter Pomerantsev is a well-known fighter against Russian propaganda. He should know that Russia desperately tries to undervalue Ukrainian independence, but, ironically, he does the same.

“Whether, maybe, some people or the segments in Kharkiv, Odesa, Kramatorsk are even more pro-Russian than they let on, that maybe. […] You try to ask proxy questions around, which gives you a fairer sense. I mean: where do you see Ukraine in the future, do you see it as independent, which is almost a proxy for with Russia, or you see it integrated into Western institutions and stuff like that. I think, it is a good proxy question” — Pomerantsev described a methodology of his research in London School of Economics and Political Science’s Arena program.

The idea that the independence of Ukraine is a myth of Russian propaganda is totally ridiculous because Ukrainian sovereignty is a universally recognized norm of international law. But the researcher of Russian propaganda thinks otherwise and embeds such a way of thinking into his academic studies. This situation poses the question, how trustworthy are such sort of studies.

Also, it seems that the principle of national independence isn’t taken seriously anymore in international politics led by geopolitical superpowers competition. This development was foreseeable after similar manipulative instrumentalization of the values of liberty and human rights in the past.

We may peacefully value our personal and national independence, but for powerful troublemakers and warmongers, it is just a battle cry for mobilization of masses and profiteering from the war. They may say today you must fight for independence, but tomorrow they may proclaim you an enemy because during the interview you expressed rather your independence than loyalty.

Preserving personal autonomy, we should avoid aligning with lies and manipulations on all sides of the information war. Remember that you are a human person, one of the billions, and you belong to yourself, not to a bunch of archaic and childishly aggressive legal persons called nation-states. Nothing can disturb your inner peace when you are mindful and continue to think constructively, independently, and critically. In fact, the obvious absurdity of information war helps independent minds to overcame a sense of belonging to any particular nation or civilization and became proudly self-proclaimed citizens of the world, dedicated to the creation of universal peace for all individuals united by reason, love, and happiness in our very individual and diverse humankind at individual planet Earth which belongs to everyone.