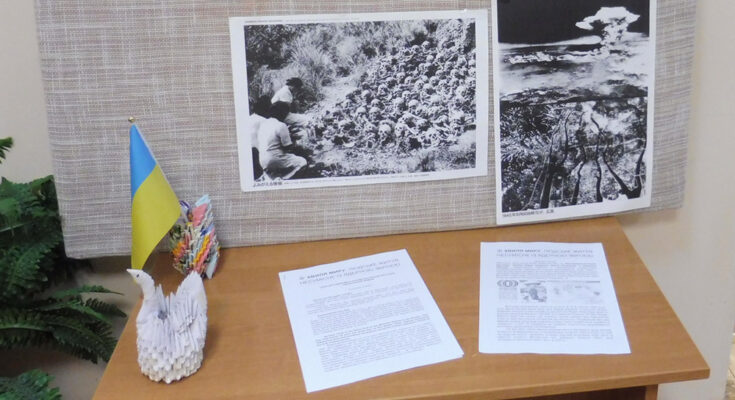 On August 6, 1945, an atomic bomb killed tens of thousands of people in Hiroshima, burned them to death.

Another tens of thousands of people near the site of the explosion which eliminated a third of the city’s population received severe burns, lethal or hazardous radiation exposure. On August 9, a similar tragedy happened in Nagasaki. Total number of victims exceeded two hundred thousand. The background radiation on the ruins, where many people came to look for relatives, caused cancer for many years.

From the diary of Ukrainian film director Alexander Dovzhenko written at the time: “In blood and cadaverous stench, mankind ended its tragedy with the invention of the atomic bomb. The atom is split, the universal sin is committed… How much misfortune will it bring? How many disasters will it cause? What terrible possibilities of individual terror this unkind invention may carry…”.

Weapons of mass destruction, indeed, multiply by zero the value of an individual human life. It is scary and deeply immoral.

Use of such weapons can only be justified by lies. Among the first such lies, on the day of the bombing of Hiroshima President Truman told on the radio that a military base, not a city, was bombed.

The myth is now widespread that a nuclear strike was needed to save the lives of the American military, to avoid inevitable losses of massive invasion. In reality, there was no adopted plan for a massive American invasion of Japan. In addition, after non-nuclear bombings of their cities Japan looked for opportunities to surrender with minimal loss of face. Truman knew it, but his close adviser James Byrnes convinced the president that the nuclear bombing would allow the United States to dictate terms of the end of war.

There is also such an insidious form of lying as a half-truth. In history class, the bombing of Hiroshima may be discussed without mentioning the bombing of Nagasaki at all. American journalist David Swanson wrote that because of myths about World War II many people in the United States don’t know that the U.S. government viewed the Soviet Union as the primary enemy even when allied with it and that the Soviet Union did the vast bulk of defeating Nazi Germany.

Survivors among Hibakusha (in Japanese, people affected by nuclear bombing) are advocating a complete ban on nuclear weapons at all accessible international fora. Their call was heard by many world leaders, and this year the Treaty on the Prohibition of Nuclear Weapons (TPNW) came into force. Unfortunately, the owners of the largest nuclear stockpiles, Russia and the United States, refuse to join the treaty.

In June 2021, the NATO summit in Brussels included in the final communiqué statements about opposition to the TPNW and about intentions to respond to nuclear threat from Russia. The arena of this confrontation is the Black Sea, where we have already seen the dangerously coinciding exercises of the Russian navy capable of carrying nuclear warheads and ships with the U.S. Aegis missile defense system.

Some Ukrainian politicians are nostalgic for the days when we had a Soviet nuclear arsenal. The leader of the parliamentary majority David Arahamia regrets that Ukraine gave up the bomb in 1994, the literal quote: “we could blackmail the whole world and they would give us money.”

Neo-Nazi political parties, such as the National Corps, Svoboda, Congress of Ukrainian Nationalists, Right Sector, and UNA-UNSO, are participating in Ukrainian elections with promises to regain nuclear weapons.

People should be reminded what a disaster nuclear war brings. Maybe some visual memories will help to stop the madness of accumulating nuclear stockpiles, neo-Nazi and imperialist plans to use weapons of mass destruction to bring all of humanity to its knees.

As part of the global Peace Wave initiative of the Japan Council against Atomic and Hydrogen Bombs, the Ukrainian Pacifist Movement organized an exhibition of documentary photographs of the horrific aftermath of the atomic bombings of Hiroshima and Nagasaki. This exhibition is open for visitors during August in the Ivana Kudri Public Library in Kyiv (Henerala Almazova Street, 14).

Also, an online meeting “Peace Wave: Why We Should Prohibit Nuclear Weapons” is scheduled for August 9. The event will include a demonstration of the photos of horrible results of nuclear bombing and discussion of the Ukrainian Pacifist Movement’s demands on Ukraine to sign the Treaty on the Prohibition of Nuclear Weapons.

Hibakusha are saying: “Humans cannot coexist with nuclear weapons.” We need to listen to them.