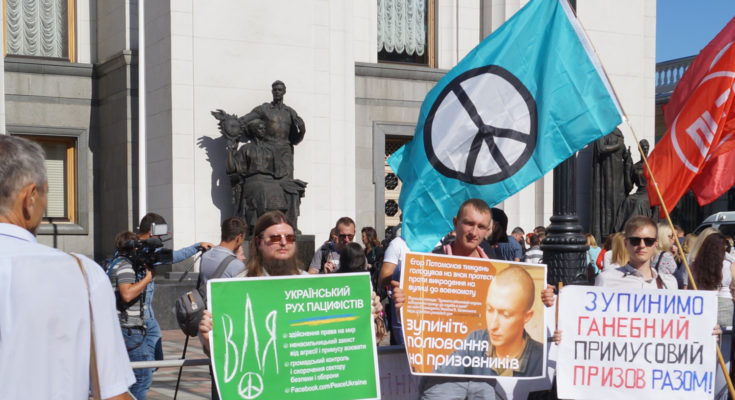 29 August 2019 peace activists picketed Verkhovna Rada (parliament) of Ukraine and President’s Office in Kyiv demanding to stop cruel hunting for conscripts. They brought the flag with a peace sign, banners of Ukrainian Pacifist Movement and portraits of Yehor Potamanov, a young man abducted earlier at the street in Kharkiv, shoved into a car and dragged in handcuffs to military commissariat where he refused to take an oath and started a hunger strike.

According to Dmytro Tyshchenko, Yehor’s brother also participated in picket, hundreds of conscripts were abducted the same way at the streets of Kharkiv this summer. Three of them cut their veins and one hanged himself in desperate attempts to get an exemption from draft on the ground of mental disorder. Abducted conscripts’ requests to meet with their relatives were refused since authorities tried to conceal bruises and injuries caused by violent transportation to military commissariat. Police failed to conduct an effective criminal investigation of abduction, inhuman treatment, and abuses of power during so-called hunting for draftees.

… [H]undreds of conscripts were abducted … at the streets of Kharkiv this summer. Three of them cut their veins and one hanged himself in desperate attempts to get an exemption from the draft …

In the words of Ruslan Kotsaba, leader of Ukrainian Pacifist Movement, today the abolishment of conscription is an important reform needed for the democratic development of a nation in light of peaceful policies promised by a newly elected president Volodymyr Zelensky.

After announcing picket for peace, the page of Ukrainian Pacifist Movement at Facebook was massively attacked by pro-military haters. However, the rally was held without accidents and covered by TV news. Near the Office of President at Bankova street protesters was handed to presidential staff petition demanding to abolish compulsory military service and stop cruel hunting for draftees at the streets. Similar online petitions gathered thousands of signatures because the conscription is an outdated and dangerous legacy of the world wars epoch, said Yurii Sheliazhenko, executive secretary of Ukrainian Pacifist Movement.

Ukrainian Pacifist Movement is a non-governmental, nonprofit, nonpartisan organization established in 2019, aimed to promote the right to peace, disarmament, the abolition of conscription, nonviolent resolution of conflicts, and democratic civilian control over military affairs.