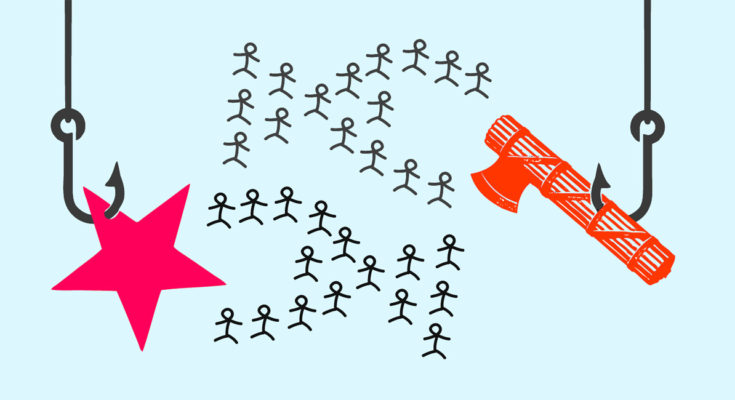 We can’t seriously blame the aliens or the rich for the universal disorder as the so-called right or left ideologies suggest.

We can blame only ourselves for our losses and alienation caused by the toxic replacement of natural self-control with delusions of political and economic determinism.

Politics and economics are failed to deliver promised peace and prosperity. It was predictable since the lore of ancient slave owners can’t provide a robust basis for the healthy universal order.

Homo Sapiens means a smart one. It is our nature. But every person every day of human life feels disastrous pressure forcing to behave like dumb masses. Pressure groups of the right call to greatness and pressure groups of the left call to equality with similar results, piling up insanely violent crowds ready to self-sacrifice.

These crowds, like the opposite pressing parts of a juicer, are used to squeeze life energy from a human person sandwiched in the center, jammed between “the people.” Toxic political identities are used to steal the individual identity of every person.

We sunk in manipulated crowds. Our nature rebels against such severe injustice. It causes all contemporary disorders, from world wars to economic crises.

Universal disorder came after corrupted values. Human morality supposed to be about good or evil, not about “us” or “them.” Human ethics supposed to narrate responsible behavior, not blind loyalty. And human rights are supposed to ensure individual happiness, not so-called national interests.

Nation means birth. Formally, we are born free and equal. But after the birth, we get the education of belonging to human capital, or so-called community, owned by someone else.

The nation is the most profitable form of predatory entrepreneurship in the contemporary world due to a formal monopoly on violence, which somehow still counts legitimate by global legal thought, against any common sense. This monopoly allows greedy national leaders to impose on citizens gigantic taxes (somewhere with direct slavery, like conscription) and spend for wars and other whims even more than earned in this horrible pillage, engaging credits and investments from international financial institutions.

We live in a world of artificial indebtedness of all nations and every person, and nobody dares to ask: “Why I must pay for the actual disorder, harmful for me? Just because they call it the public good, so irrelevantly and ridiculously?”

Few people plan to benefit from the indebted human race. It would not be wise to resent them because their life is extremely unhappy since their plans are daily ruined. Any plan of total enslavement is doomed to fail, and so is doomed author of such plan being a slave of own ignorance and evil intentions.

The economy of every community is managed by a few patricians devastating the homeland, blaming the human nature for the attitude to rebel against slavery. They think all workers and consumers serve them as profitable clientele, but far-left movements go astray annulling social and financial capital gathered during the centuries. Villas of ancient Roman patricians were burnt by their armies of slaves, so the contemporary fathers and mothers of nations running their elitist economies one day will become homeless.

Politics of every nation is owned by a bunch of oligarchs corrupting the cosmopolis, blaming people for resistance to their whims. They think all violence must serve them, but far-right movements go astray and terrorize their parents and sponsors. Ancient Greek oligarchs were ostracized or killed in their city-states for elitist policies, and the global oligarchy of today will once be exiled. Even now, these masters of global (dis)order have to hide from the public eye.

We are used to defining our identities by nationality, social status, religion, and culture. Is it wise to consider our precious persons secondary to such vague categories? Especially, if these categories are owned by someone else and instrumentalized to manipulate us and to oppress the inherent liberty of the human mind?

We can, of course, reclaim our culture. For example, we can use the language of slaveholders to declare our freedom. But more importantly, we must understand that we create the language, not the language creates us. Any group, any family, any community, any corporation, any nation is just an individual like any human being. All individuals have personalities, so the person is a basic institution of social life.

True identity is personality. The national identity is just the identity of a couple of hundreds of governments. We have billions of personal identities, natural and proudly constructed. It is the real power of humankind.

Pressing from the right and the left, aggressive elites will get nothing. Nobody can squeeze a sovereign individual from the center of the amazing personal universe. If you refuse to understand personal autonomy, you can’t even touch this treasure, not to say steal it. But, when you discover personal autonomy, it will be clear to you that it is inalienable, so any attempts to steal it are useless.

United Individuals are coming to bring fairness to the flawed world of the United Nations. Every person will become the mindful and passionate creator of his or her own life. Believing in oneself, we will create one liberal universe open for happy miracles of the future.