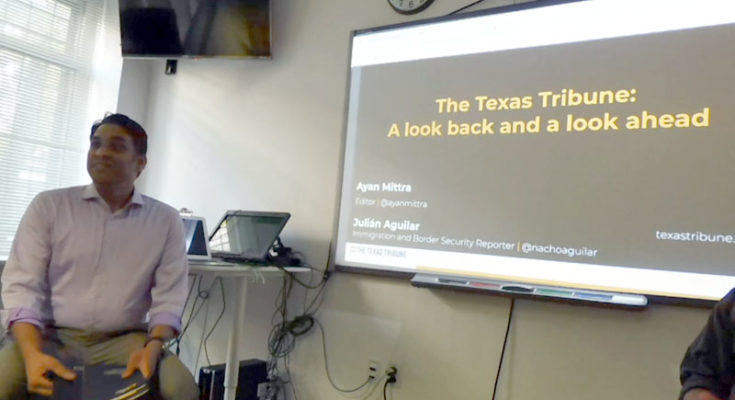 “We were founded at the time of the economic downturn in the United States and the global recession. There was a lot of pullback in terms of coverage of state government. Traditional newspapers and media organizations, which were for-profit companies, were cut back because of layoffs. So, there was a gap: many laws, affecting Texans, was not covered. People need to know what’s going on in state government. We were founded as nonprofit because our co-founders believed we take the public service mission. We focused solely on state government politics, policies, and statewide issues. We want to keep this focus as narrow as possible to preserve the support of people,” told Ayan Mittra, editor of The Texas Tribune. He emphasized that high-quality journalism can be funded by public donations it attracts.

Pravdoshukach Newspaper asked colleagues from Texas, do they cover court cases and what kinds of investigative journalism they practice to fight corruption.

In the words of Julián Aguilar, journalist of The Texas Tribune, the NGO regularly requests and publishes different kinds of public information. For example, in the data journalism tool Government Salaries Explorer highest-paid employees are highlighted with sports coaches on the top, earning millions of dollars on the expense of taxpayers. Similar public databases are created on the issues of education, criminal justice, and ecology. Sometimes The Texas Tribune use court records, which are accessible to every citizen in Texas, unlike Ukraine, despite sensitive information, such as names of informants, may be sealed by the court. On the other hand, journalists allowed to take photos and videos in Ukrainian courts, but such techniques are forbidden in Texas: only old-school handwriting and drawing are permissible there in the courtroom.

“We don’t have a court reporter to cover many different federal and state courts in Texas. We come to court if it pertains to something of our concern. For example, I will sit in immigration court,” explained Julián Aguilar. The Texas Tribune covered famous cases of a voter ID law, police shooting, and gerrymandering. Journalistic investigation of spending more than $7000 of public money for an extravagant flight of members of the Texas Alcoholic Beverage Commission resulted in resignation or replacement of all wasteful officials and cuts in travel budget of the agency.