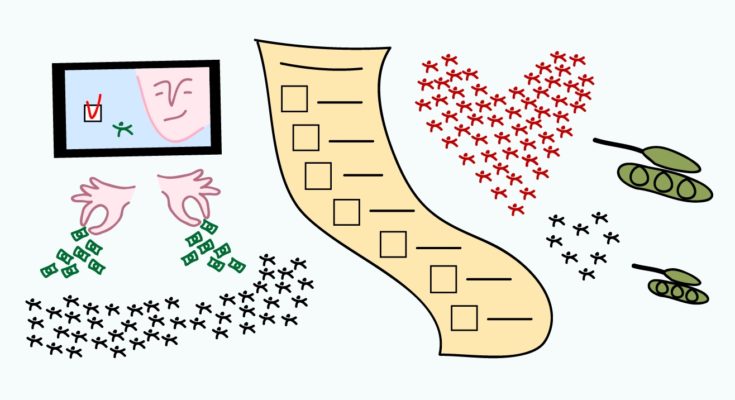 Presidential elections in Ukraine become a theatre of the absurd, a typical example of the worldwide decline of democracy. Almost all politicians are incapable to propose people participation in open-minded decision making and sincere conversation. Instead, they spread meaningless propaganda and manipulate the electoral process, using unfair political technologies.

The leader of voters’ sympathies is Volodymyr Zelensky, a comedian without political biography. He tries to perform in real life own role in the sitcom “Servant of the People”: a young president, fighter against corruption. He claims he can achieve the peace in Ukraine using diplomacy, preserving the territorial integrity of Ukraine, maintaining a partnership with the EU and NATO. He promises referendums, flourishing economy, social justice, care for elderly people, development of education and medicine, European standards of environment and IT.

Zelensky presents a smart compilation of well-known dreams, created by Ukrainian politicians in previous decades to attract voters. Playing with feelings, he simulates the most brutal fantasies like the execution by shooting of all MPs. He is a politician of a new generation, doesn’t even claiming honesty. He addresses the voters who anticipate false ads, claiming to be the human face of a simple and understandable advertising model of the state. In this model can’t exist the human as a creator of own life. You can only consume the finished product, not so perfect as advertised, but nobody cares.

Zelensky’s political model produces feelings of comfort, illusions of hope without any real reason, helping people to forget for a short time of elections that they are oppressed by debts, fears, and algorithms of crowd manipulation. If the illusions will work, it will prove to puppeteers of Zelensky’s campaign that they can treat Ukraine, exhausted by the war and extractive institutions, like a toy in their hands. Of course, slavery is stressful, but it isn’t necessary to liberate the slaves – isn’t it? – if you can simply relieve the stress of slavery by periodic sessions of laughter therapy. The mask of a young leader hides a tyrannic political machine of elitism.

On the other hand, obvious tyranny of the elite is embodied in a failed regime of the authoritarian president Petro Poroshenko, who shamelessly runs for a second term, despite his candidacy is hated by the millions of Ukrainians. His stubbornness, abuse of power, cash sowing, financing of shadow schemes and technical candidates severely threaten the integrity of the electoral process.

Poroshenko’s choice of election campaign priorities indicates that he feels himself the dictator of the agenda and isn’t going to listen to any criticism. Poroshenko promotes the simulated success of reforms, although the people associate his name only with an insane war and catastrophic impoverishment. Poroshenko poses as chief commander of the army, which hates him for making money on bloodshed. Poroshenko demands mandatory use of Ukrainian language, although violence can only destroy knowledge and culture, and the last century of coercive patriotic education, both by communist and nationalist state, brought us only wars, triumphant ignorance and loss of people’s sense of responsibility for their destiny. Poroshenko speculates on the political ambitions of church leaders and, in fact, established state religion, weaponizing the faith for hybrid war. Everything Poroshenko can offer is an army without honor, state language without democratic dialogue, faith without honesty, and a nation without humanity.

Former Prime Minister Yulia Tymoshenko isn’t differing much from the incumbent president in “iron fist” ambitions. Tymoshenko presents herself as a less toxic version of Poroshenko, suggesting no changes in Ukraine’s foreign and domestic policies, except some concerns for poverty alleviation. However, it is difficult to believe in her sincerity, since Tymoshenko doesn’t criticize the dominant economic paradigm, according to which the growth of inequality of income and fierce competition for survival are the driving forces of economic development. Her team is driven by militant dogmatism: if Tymoshenko becomes president and commands her hawks to finance social programs and to create jobs for the unemployed, they will make people gnaw through the throats for the smallest privileges. In addition, Tymoshenko says she will not profit from war, but she is preparing to continue the endless “war to victory”. Really, can it make any sense with a modern war as, essentially, monetization of bloodshed? Who will earn the money from the Tymoshenko’s war, if she so decently refuses to own this shameful business, but shows no intentions to close bloody enterprise for the common good?

Yuriy Boyko, former Minister of Fuel and Energy, proposes to end the war in Donbass with the help of Russia as a mediator. In the domestic policy, he focuses on the economic development of regions and empowerment of the state to maintain peace and rule of law, particularly to fight extremism. This pickup of Poroshenko’s decentralization policies, similar to Putin’s neo-feudal federalism, doesn’t promise any prospects of human development and doesn’t rely on any powerful driving forces. Moreover, Boyko himself is hardly perceived as an independent political figure, as the President of Ukraine should be. Deadly seriousness also can’t bring more votes to Boyko: it’s hard to remember he smiled at least once, unlike even President Poroshenko with his famously insincere grin. Lack of charisma can’t be compensated by the Russian gas dollars.

Former Defense Minister Anatoliy Hrytsenko closes the top five leaders of the presidential race, promising to be the only honest president and… to “chop the hands” of corrupt officials. Like Poroshenko and Tymoshenko, Hrytsenko intends to build a strong state with a regulated economy by the Keynesian textbooks, truly deliver it without deception. A strange mixture of coercive recipes and claims of allegiance to liberal principles shown by Hrytsenko is very similar to Putin’s speeches. This is not surprising, given the same education: both passed the Soviet military high school, both learned the basics of democracy from trainers employed by the aid of U.S. taxpayers. So, the promise of colonel Hrytsenko to abolish compulsory military service can’t be trusted, rather a harsh mobilization and declaration of martial law can be expected from possible President Hrytsenko. He definitely can bring more discipline and regulation of social life, finally and officially transforming Ukraine into a junta-ruled banana republic.

By and large, voters have no trust to anyone between the leaders of the presidential race. So, none of them will win in the first round; the second round will be decisive. This is a result of the absurdity of current elections. In times of great transformation, when individuals evolve and nations develop a more decent society, it is ridiculous to preserve the tyranny of the elite, promising so-called simple people unrealistic rewards in return for submissive ignorance, irresponsibility, and self-removal from real politics. People are not so simple as it seems to political consultants. Each manipulator sooner or later will have a painful experience of how dangerous it is to play with and plot against reason and free will, neglecting the imperative of human development.