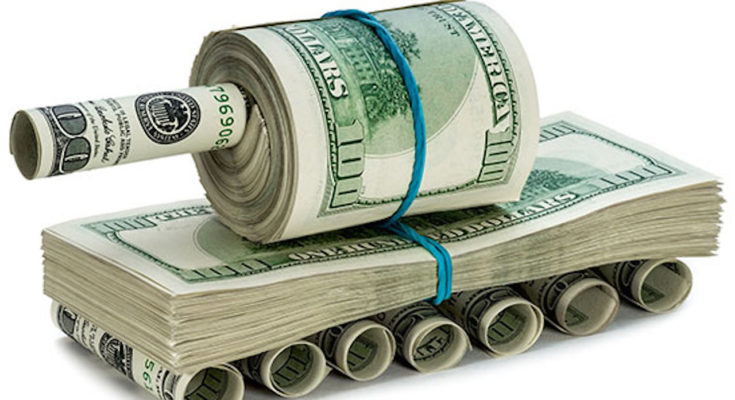 Ministry of Defence of Ukraine spends annually 7 times more public money than five years ago. Its budget raised from 15,1 billion hryvnias in 2014 to 102,5 in 2019.

After President Zelensky announced a 16% increase in the military budget next year, the parliament adopted the 2020 state budget with 117,5 bln UAH (near 4,9 bln USD) granted to the Ministry.

Outraging waste of money to fuel war machine killing the people accompany by odious corruption, especially in the military industry.

Also, Ukraine suffers from shameful poverty among workers caused by the bad habit of the leaders of the national economy to underpay the labor.

After the annexation of Crimea by the Russian Federation and armed conflict with Donetsk and Luhansk separatists, inflation in Ukraine went dangerously rampant. The value of the national currency decreased more than three times after 2013.

The president, the parliament and the government in Ukraine ignore petitions of peace-loving citizens asking to cut military spending and reallocate inflated budgetary funds from the war effort to human development programs aimed to achieve peace and social justice, said Yurii Sheliazhenko, executive secretary of the Ukrainian Pacifist Movement.

“Average military spending in the world is near 2% of GDP. In Ukraine, it is almost 4%. Our military commanders wrote in their official doctrine that at least 5% of GDP must be spent on the defense and national security. It is totally inappropriate and contrary to the national interests of Ukraine as a peace-loving nation-state. Maximum 2% GDP for war-lovers must be a red line, and it is still too much money to sacrifice for the profession of mass killing and the industry of violence called the army. The 1,5% war tax and inhuman 19-century practice of conscription must be abolished. Austerity measures are needed to limit military spending, it must be included in a memorandum of economic and financial policies Ukraine sending to the International Monetary Fund when asking for financial support,” said Mr. Sheliazhenko.