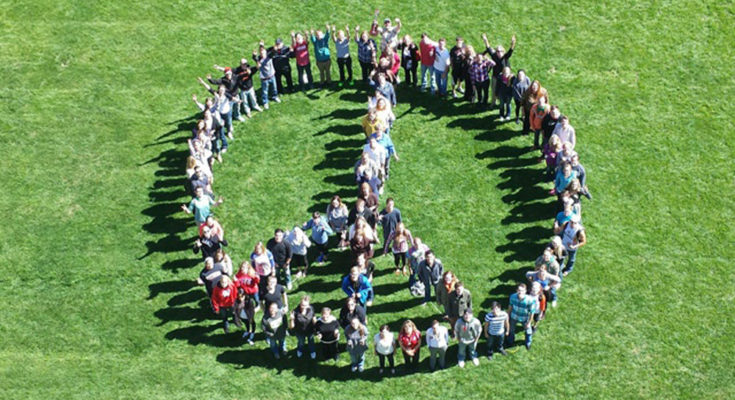 Ukrainian Pacifist Movement issued a short documentary about peaceful history of Ukraine and the newsletter to celebrate the International Day of Peace.

Peaceful History of Ukraine: a short documentary dedicated to the International Peace Day

The short documentary describes the historical development of peace culture in Ukraine, which includes nonviolent life of ancient people like the philosopher Anacharsis from the northern Black Sea coast, medieval notions of peace, e.g. in the testament of Yaroslav the Wise, 19th-century antimilitary writings of Taras Shevchenko and Mykhailo Drahomanov, the emergence of Ukrainian sections of War Resisters’ International and Women’s International League for Peace and Freedom in the first half of 20th century, official and unofficial peace movements and repressions against pacifists in Soviet Ukraine, the introduction of alternative service (1992) and the abolition of nuclear weapons (1994) in independent Ukraine.

Ruslan Kotsaba: amnesty for those Donbas combatants who are not guilty in war crimes should help to achieve peace

Many armed conflicts in the world came to peaceful resolution after the amnesty for combatants, and Ukraine should declare such amnesty to resolve the Donbas conflict. President of the Ukrainian Pacifist Movement Ruslan Kotsaba expressed this view at the Magnolia TV channel. Also, he emphasized that the amnesty should not grant impunity to war criminals whose guilt in crimes against humanity is proved by a fair trial.

OSCE continues to report violations of Donbas ceasefire on both sides

OSCE SMM recorded 1 066 ceasefire violations in both Donetsk and Luhansk regions after the adoption of additional measures to strengthen the ceasefire of 22 July 2020 by the Trilateral Contact Group. According to the SMM daily reports, Ukrainian Armed Forces and armed formations of the Donetsk and Luhansk regions extend their trenches. President Zelensky informed that 6 September one Ukrainian soldier was killed and another wounded. Several news outlets inform that pro-Russian separatists declared 16 September at the Trilateral Contact Group that, in their view, Ukraine abandoned additional measures to strengthen the ceasefire because of refusal in joint inspection in the area of the village of Shumy.

As a result of the spring military draft 16 460 conscripts were drafted in May-July 2020, reports the Ministry of Defense of Ukraine. As announced, the planned number of conscripts may be decreased by 1 500 (to near 15 000) during the autumn conscription campaign in October-December. Spring military draft was delayed by one month due to COVID pandemics (10 deaths, 709 infected in the Armed Forces of Ukraine today). During the draft, the police informed about several arrests of officers of the military commissariats and military medics for taking bribes to help conscripts to evade the draft. Several episodes of violations of rights of conscripts to the deferral of enlistment due to admission to the higher education institutions were reported by the media and parliamentary human rights commissioner.

Ukrainian Pacifist Movement received letters from the Ministry of Justice of Ukraine and Secretariat of Parliament Commissioner for Human Rights with rejection on the proposal to include the goal of protection of the human right to conscientious objection against military service into the Ukrainian National Human Rights Strategy. Once again, as all past years, the government demonstrates unwilling to comply with the UN Human Rights Committee Concluding observations on the seventh periodic report of Ukraine of 22 August 2013 № CCPR/C/UKR/CO/7, recommending that alternative service arrangements in Ukraine should be accessible to all conscientious objectors without discrimination as to the nature of the beliefs (religious or non-religious beliefs grounded in conscience) justifying the objection, and should be neither punitive nor discriminatory in nature or duration by comparison with military service. The 2019 Annual report of the European Bureau for Conscientious Objection revealed that in Ukraine objectors are discriminated against, alternative service is hardly accessible, and draft evasion is criminalized.

Disarmament is not a crime, it is a necessity: pacifists criticize the State Bureau of Investigations (DBR)

The State Bureau of Investigations should not criminalize disarmament, including a decrease of military personnel of the Armed Forces of Ukraine in 2011-2013 years when conscription was temporarily abolished. This opinion was expressed by pacifists commenting on the statement of the agency that political and military leaders of the time are under investigation for a crime of high treason, committed in a way of organizing disarmament. Criticizing the DBR, pacifists explained that disarmament is not a crime, but a necessity for all people of the world and a legitimate way to universal peace recognized by the international law, in particular, the Preamble and Article 11(1) of the UN Charter.

Ukrainian Pacifist Movement expressed deep concern by the recent rhetorics of Donald Trump and Vladimir Putin, which revealed a large scale arms race between the great powers. “People of the Earth need peace and happiness, not deadly rockets.” — says statement of the organization.

Ukrainian Pacifist Movement (UPM) is a non-governmental, nonprofit, nonpartisan organization established in 2019, aimed to promote the right to peace, disarmament, the abolition of conscription, nonviolent resolution of conflicts, and democratic civilian control over military affairs. UPM is a member of the European Bureau for Conscientious Objection, a section of War Resisters’ International, and a member of the International Peace Bureau.